Is fairtrade really fair? Dutch journalist Teun van de Keuken doesn’t think so. Unfortunately we have to agree with him, but his statement also asks for some nuance. The question we need to ask first is what the definition of fairtrade actually is.

The Dutch newspaper de Volkskrant from May 15 2017 published and interesting column (in Dutch) by Teun van de Keuken. He agues that fairtrade is hardly more than a way for middlemen such a supermarkets to make a profit, and that farmers, the people who are supposed to benefit, are left with pennies. His recommendation is to have the final products also produced in the countries where the farmers cultivate the raw materials. Because that’s where the most money is made.

All this time Teun implicitly discusses the fairtrade certification by Max Havelaar (fairtrade is written as one word by them), the certification aimed at farmers and agricultural products. And answerig the question ‘is fairtrade really fair’, with no, regarding this certification is unfortunately right.

But we should not forget there’s another Fair Trade certification, the World Fair Trade Organization (WFTO, Fair Trade written as two separate words). This organisation aims to make the production process of final product fairer. So with doing this the WFTO actually does what Teun suggests. While this might not be very useful for the farmers growing our coffee, cocoa and bananas, it does mean something for the people making our clothing, toys, fashion accessories and home products. I think it’s a shame Teun does not recognise this and in the process also unfairly damages the image of Fair Trade.

The organisations that have been certified by the WFTO working according to ten principles shown in the image below. Of course requirements are much more comprehensive, read more about it here. 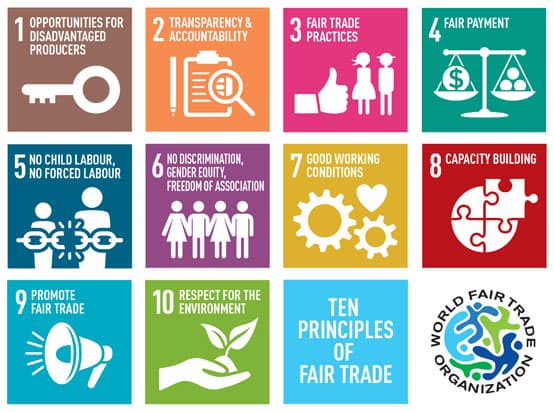 These is one point from the principles above I would like to highlight, and that’s the fourth principle ‘Fair Payment’. Fair payment is specifiek as the payment of a fair price, incase of a product, that’s established together and in mutual agreement. This means the price is not set by the world market, like is the case with many agricultural products such a cocoa. Producers are able to give a price that they deem fair payment for their work, the buyer might be able to negotiate a but, but he or she does not determine the price.

Most labour and added value is present in the production of the final product, and producers get paid fairly for that labour. This means they get a much larger part of the profits compared to only delivering the raw materials.

Is fairtrade really fair? Fairtrade might not be, but Fair Trade is.

Would you like to know how Tulsi Crafts deals with Fair Trade and certifications? Read here about the principles we adhere to cooperating with our partners in Bangladesh and India.