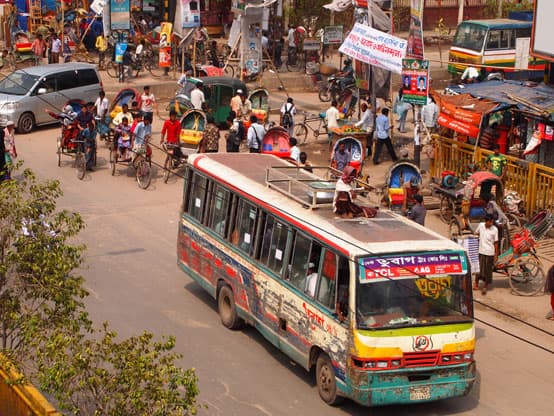 Today, while we remember Rana Plaza collapsing four years ago, let me tell you a bit about the Bangladesh I’ve come to know. A complicated country with many contradictions that somehow captured my heart in between all its troubles. About why Rana Plaza still matters and about what we can do.

The idea for Tulsi Crafts started in 2011, when visiting Bangladesh for Niketan Foundation. We visited Bangladesh for a few weeks and drove around bustling Dhaka in a CNG (a tuk tuk,

Read more about: Thinking of Rana Plaza, Dhaka and Bangladesh  → 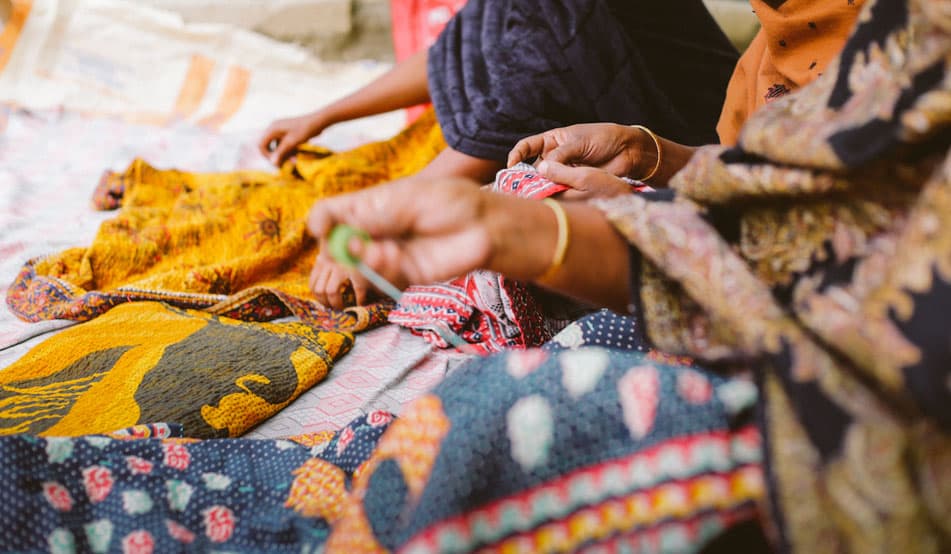 Embroidery, it may sound like a bit of a boring hobby to some of us. But in India and Bangladesh it can be a skill of vital importance. In Bengal embroidering with the traditional kantha stitch is passed from mother to daughter. They traditionally make kantha quilts for their families using this technique. We use this skill together with a local NGO of keep women out of slavery.

Slavery is still a big problem,

Read more about: kantha quilts and scarves: meet the makers  → 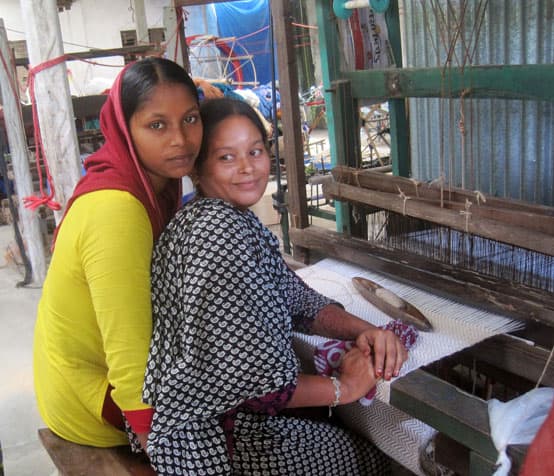 Our collection of fair trade bags from handwoven jute is growing, as is the group of artisans who make the bags in Bangladesh. They’re becoming more professional over time, and that’s a wonderful thing to see. We’d like to show you who makes our bags and how they are made.

Jute is a beautiful material, often called ‘the golden fibre’. At the same time it’s very strong and environmentally friendly. It grow as a rotation crop in the rice paddies of Bangladesh, 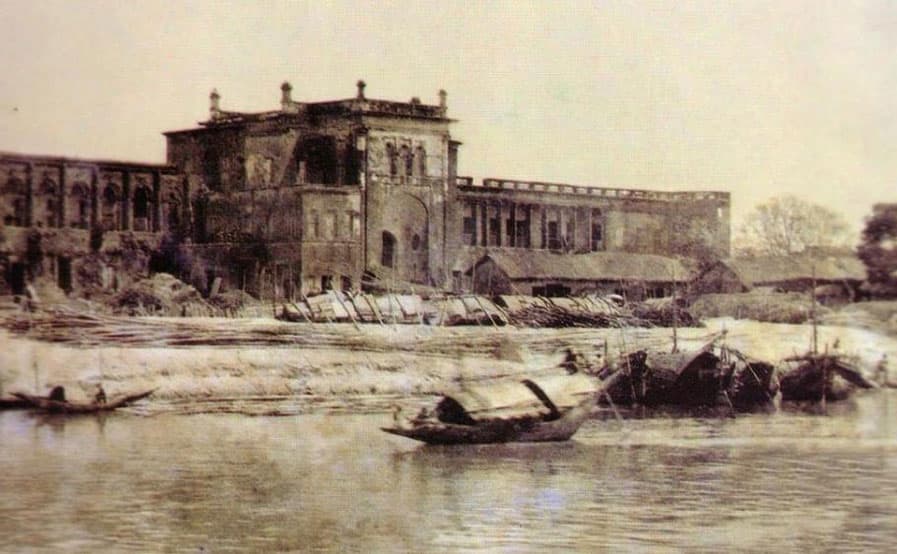 Sometimes you come across something so striking you want to share the experience, so that’s what I’ll do today. I’d like to take you to Bangladesh, not present day Bangladesh, but Moghul era Bangladesh (1526-1858).

Dhaka became the capital of the Moghul province of Bengal in 1608. It was one of the largest and most prosperous cities of the Indian subcontinent and the center of the worldwide muslin trade. During this era the part of Dhaka now called Puran Dhaka (Old Dhaka) was built.

Read more about: travelling to Moghul Bangladesh with Mohur  →

Indigo, for centuries the only pigment able to dye textiles blue. The blue from jeans and Japanese kimonos. Bengal was one of the biggest indigo producing areas, until the indigo revolt in 1859. Farmers rebelled against exploitation and the invention of synthetic indigo around 1890 led to a sharp decline in the use and cultivation of natural indigo.

The Living Blue cooperative brought the indigo tradition back to life and creates much needed economic activities in the poor Northwest of Bangladesh. 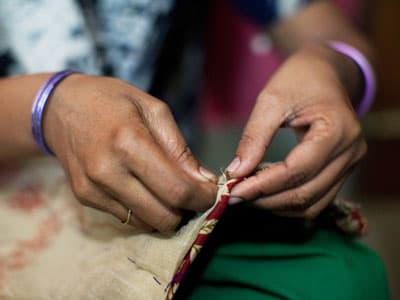 The other day I received an email from someone asking me why Tulsi Crafts works on a small-scale in Bangladesh, when the country has so many large-scale problems. Especially the textile industry of Bangladesh has huge problems, as we’ve seen when a factory collapsed last year causing many deaths and injuries.

It is most definitely important to make changes on this large scale. There is a lot of attention for these changes at the moment,

Read more about: Problems in the Bangladesh textile industry  → 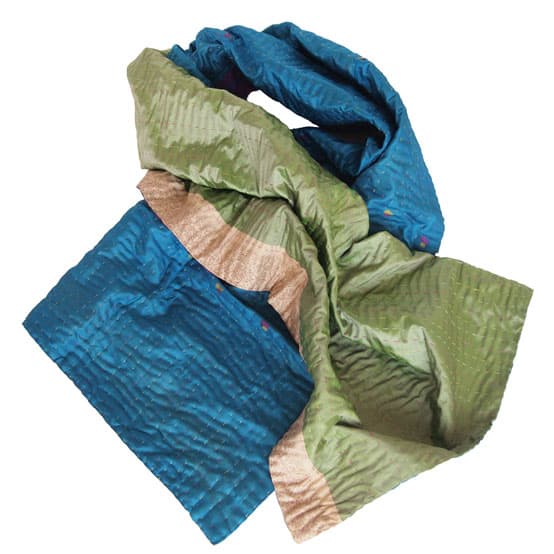 The first time I travelled to Bangladesh was in the summer of 2011. The trip felt like a discovery of a strange world to me. Bangladesh is different in so many aspects from our own world. Just like Alice, sometimes I felt very small and sometimes very large. Small and powerless when faced with poverty on such an enormous scale, large and conspicuous when we couldn’t find our way again and everyone wanted to help (and take a look at us).

Read more about: Tulsi in Wonderland  → 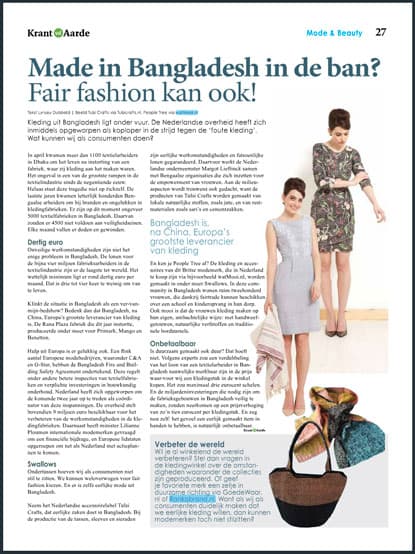 Lynsey Dubbeld from Mode voor Morgen (fashion for tomorrow) has written an article on fair fashion from Bangladesh for the De Krant van de Aarde. She mentions Tulsi Crafts an an example of a label that trades fairly with Bangladesh, guaranteeing fair working conditions and a decent wage.

Read more about: Ban made in Bangladesh? Fair fashion is the alternative!  → 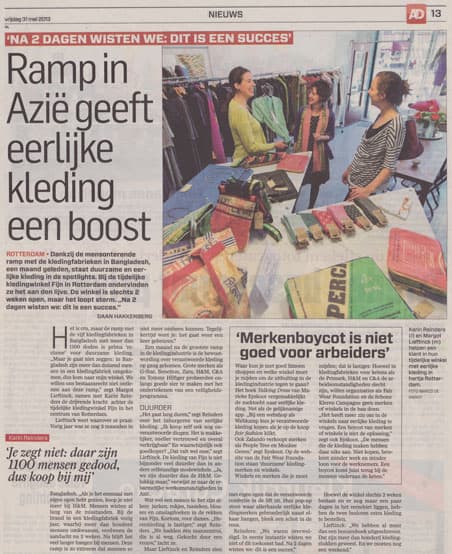 Journalist Daan Hakkenberg from the Dutch newspaper ‘Algemeen Dagblad’ visited our popup store for fair fashion and interior FIJN. He wrote an article on how the disaster in Bangladesh has put fair fashion in the spotlights. The article ‘Ramp in Azië geeft eerlijke kleding een boost’ (Asia disaster boosts fair fashion) was published om May 31, 2013. 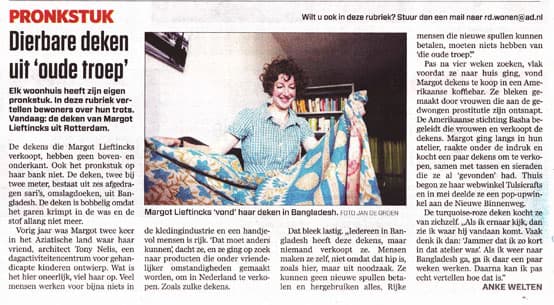 The Dutch newspaper ‘Algemeen Dagblad’ published an interview with Margot today. The subject of the interview was the most favourite item in Margot’s house, a kantha sari blanket from Bangladesh. She explains how this blanket led her to start Tulsi Crafts.